The classic Caffè Misto, which the French call café au lait, consists simply of half brewed coffee and half steam milk. You can customize the taste by choosing different roasts. For example, a darker roast like Starbucks® in Sumatra makes a bolder cup.

The Latte, on the other hand, includes espresso and steamed milk with a light layer of foamed milk on top.  The latte is the creamiest espresso beverage of all beverages.

Cafe au lait and caffe latte both have the same ingredients: coffee and milk, but they’re very different. Let’s explore the two so you can confidently order your favorite. 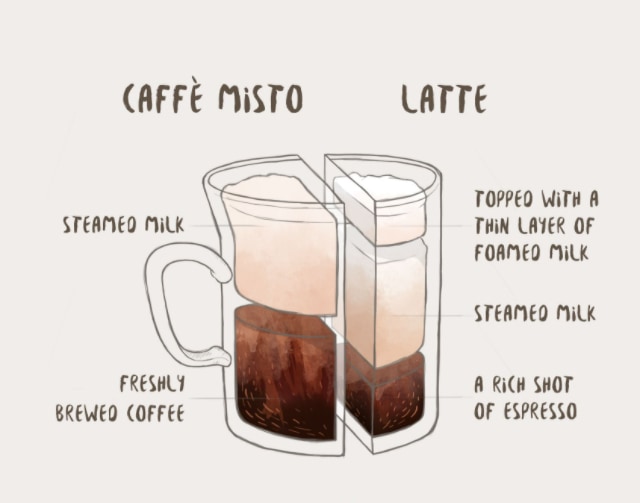 Latte is a shortened version of Caffé Latte, which means “coffee with milk” in Italian. Traditionally in Europe, a latte will be 8 ounces, of which it is espresso, steam is steam milk and the rest is thin a thin layer of foam over it.

They are commonly topped with latte art, stylized images on the top surface. Skilled (home) baristas make latte art by pouring the steamed milk and foam.

Lattes are one of the milkiest espresso drinks. Surprise, surprise: they taste smooth and creamy. You could call it the “gateway drug” for strong coffee beverages.

More recently, many flavored lattes have become popular in cafés and shops, some of which don’t even include coffee! These include turmeric, pumpkin spice, chai, and matcha lattes, among many others.

What Is A Café Au Lait Or Caffe Misto?

Although café au lait also means “coffee with milk”, this French drink is very different from its Italian counterpart. And confusingly, it can vary around the world. In fact, many North American cafes, including Starbucks, call their café au lait the Caffe Misto. I do not know why.

In their home country France, they make lattes in coffee shops with an individual mixture of espresso and steamed milk. Unlike a latte, a latte doesn’t have milk foam. It is traditionally served in a small, wide glass bowl so you can easily dip the cake into your coffee beverage.

Elsewhere it is more often prepared with strong coffee than with a shot of espresso and served in a cappuccino cup for better heat retention. French press coffee, with its oily mouthfeel and heavy body, is a popular choice. This makes the café au lait an ideal drink to enjoy at home because you don’t need a latte machine.

The best-known regional variant of latte is in New Orleans; combines chicory coffee and blanched milk. Chicory makes it slightly bitter, which is often served with the very sweet and sugar-coated donuts called fritters.

The classic Caffè Misto, which the French call café au lait, is simply half brewed coffee and half steamed milk. You can adjust the flavor by choosing different roasts. For example, a darker roast like Starbucks® Sumatra will give a bolder cup. The Latte, on the other hand, includes espresso and steamed milk with a light layer of foamed milk on top. See the differences between these two creamy, satisfying coffee drinks side-by-side

Does A Café Au Lait Have More Caffeine Than A Latte?

How much Milk is in Latte vs Café Au Lait?

Café Au Lait and latte are quite similar in terms of milk quantity. Both of these coffee drinks use about 1 to 1.5 cups of steamed milk. What makes them different is the coffee base, which is espresso in latte and brewed in Café Au Lait.

The ratio of the ingredients is one of the most important factors in coffee brewing generally.  For a Caffé Misto, the two major ingredients (coffee and hot milk) are mixed in a 1:1 ratio.

On the other hand, the latte has three main ingredients—a rich shot of espresso (1/6), hot milk (4/6), and a thin layer of foamed milk (1/6, and thinner than a cappuccino’s).  This drowns out much of the espresso’s more potent taste—giving the cup its characteristic smooth, mild, and refreshing flavor.

We’ve all been in this situation before; in a coffee shop, looking at the menu, wondering – what are all these coffee types, and how different can they possibly be from one another? After all, they’re all just coffee, right?

But now you know where they differ. Latte and Café Au Lait are all names of common types of coffee, and they differ from each other in two areas – the coffee base (brewed or espresso) and the quantity of milk used. Making the coffee base differently can literally change the flavor when you compare Cafe au Lait vs Latte. Now, who knew that?

Is Cafe Misto from Starbucks Good?
Starbucks brewed coffees are good, but if you want to ramp up your order just a little bit, try a Caffè Misto. It is a one-to-one mix of fresh-brewed coffee and your favorite steamed milk.
What does a Caffe Misto taste like?
Caffé Misto has a comfortable, no-frills visual appeal. Sure, it’s not as artistic as a latte—but it has an appealing look from the total integration of the coffee and milk. It’ll have a strong coffee flavor (sometimes bitter, especially if you use a French Press) – but a smooth finish.
How does Starbucks make Caffe Misto?
At Starbucks, the cafe au lait is called a Caffè Misto. It’s made with half brewed coffee and half steamed 2% milk. Even if you don’t see cafe au lait or Caffè Misto on the menu, you can easily request one. It’s a simple drink most baristas will know how to make. Since it’s half drip coffee, you can ask for it to be made with any of their brewed coffees like Pike Place Roast or Blonde Roast. If you don’t specify the milk, they’ll make it with 2% steamed milk. • Brew coffee: Grind coffee (or use pre-ground coffee) and brew in a coffee machine. • Froth milk: There are a few ways to froth milk at home if you don’t have an espresso machine. The two best ways are to use a French press or an electric milk frother.) • Pour coffee into a cup. Add frothed milk.