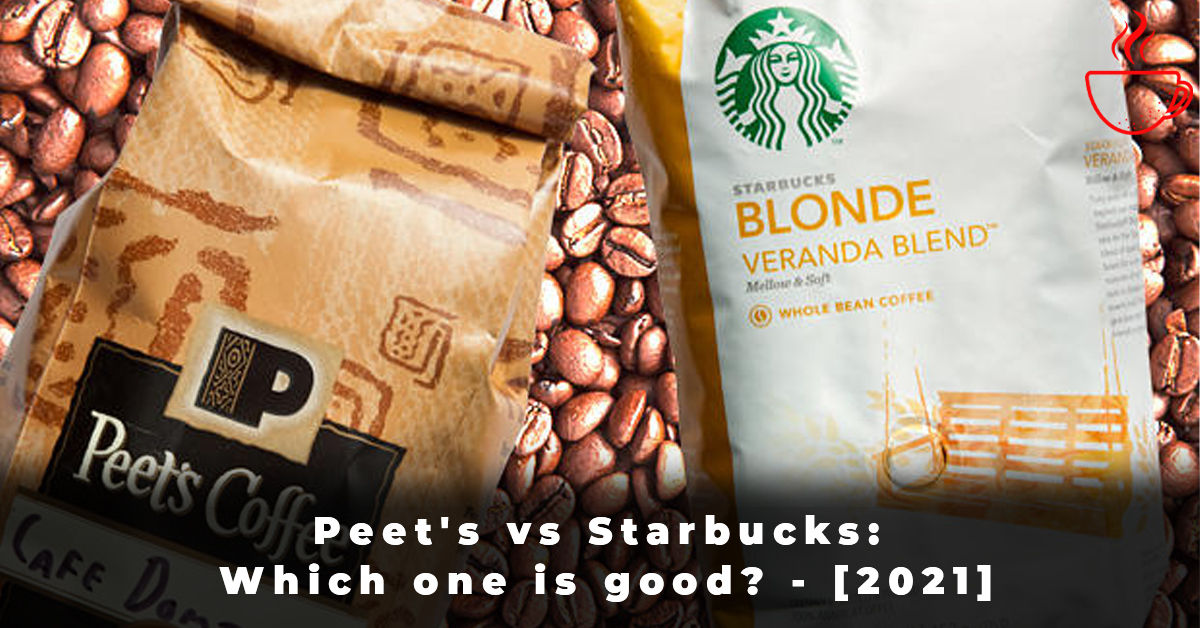 There are millions of coffee lovers in the world who drink daily thousands of liters of coffee and there are two most famous brands of coffee in the world one is Peet’s and the other is Starbucks. They both are American brands but both have differences in culture.

There is a constant debate between both brands lovers who claim that their Starbucks is the best while opponents claim that Peet’s is the best so, we decided why not figure out which one is better and end this debate so, here we are comparing both brands.

This was a very small American coffee house that was established in 1971 by Gordon Bowker, Jerry Baldwin, Zev Siegl in Seattle USA. At that time nobody knows that this small coffee house one day would be in the largest chains of coffee houses around the world.

It has more than 30000 branches all around the world and you will be shocked to know that most of this number is situated only in one country which is the USA. There are millions of people who won’t start their day if they don’t drink Starbucks coffee. There is no doubt in it that Starbucks is one of the most known brands around the globe.

This brand is not very famous as Starbucks in the market but there is one thing which you should know that Peet’s is one of the first brands that make the coffee house they are the pioneers of the coffee houses in the USA.

Now let’s see the comparison between these two brands in more detail.

Peet’s coffee is not very known and famous in the world and even in some states of USA. We tried the Meet’s coffee and we were surprised that their coffee was way better than the Starbucks in the taste. The flavor, richness, and aroma were perfect for how I wanted to drink. In my view, the winner of the taste is Peet’s

Starbucks is one of the popular companies in the world so, they know the importance of technology and that is why their mobile app is very good, and ordering from that is very simple. If you don’t want to go out and want to drink the coffee then you can order the coffee and receive it on your doorstep.

Peet’s is also a very good company but their management is not efficient as Starbucks that is why their app is not that simple to use and if you have to order from the app then you might find it hard as compared to Starbucks so, they need improvement.

In the comparison of the mobile App, the winner is Starbucks, and Peet’s needs some improvement.

Starbucks is one of the most known companies in the world so, they realize their responsibility for nature and drive a campaign “ground for the gardens” in which they decided to keep the ground of the coffee for composting purposes. The cups that are sued for the coffee are 10% made of the recycled material.

Peet’s is not a very big company but still, they are doing very good for the environment which is very good but not known by many people because they don’t invest in the marketing of their campaigns. According to resources the most of the things used in the Peet’s are recycled and used again including the waste, coffee bags, cups, and all other things.

So, in this comparison once again the Peet’s wins the battle.

Starbucks coffee is one of the most affordable coffee don’t judge me first listen to the whole story if you are the one who drinks Starbucks coffee daily and you order the White Chocolate Mocha Grande then it would cost you around $4.45 bucks.

Peet’s is also known to be very affordable but when we order the White Chocolate Mocha Grande in the Peet’s then it cost around $4.95 bucks that means that Peet’s coffee is 50 cents more than the Starbucks.

I know you might think that this is nothing we are discussing 50cents but that is not the case if you drink the same coffee daily in the month you are saving $15 and in a year $180 so, now the decision is yours.

On the other hand, if we see the availability the Starbucks is a winner in that competition and most of the times Starbucks is better but in taste, the Peet’s has good taste but we can understand that they are really busy so, might be the coffee that I received was not good.

But if we see the overall comparison report then Starbucks is one of the best options for you because in every corner of the world you will get at least one branch so, it is widely available and a bit cheaper than the Peet’s too.

Is Peets the same as Starbucks?
No, they are not the same they are two different brands. The Peet’s was founded in 1966 in California while Starbucks was founded in 1971 in Seattle. There is a total of 200 branches of the Peet’s around the USA while on the other hand, Starbucks has more than 30000 branches globally from which more than 15000 are in the USA.
Is Peet's Coffee good quality?
Peet’s coffee is one of the pioneers of the coffee houses in the United States of America. We have tasted the coffee of the Peet’s and as compare to Starbucks it is the more delicious, richer in flavor, and has a very good taste that is why I would say that Peet’s coffee really tastes good even more than Starbuck’s.
Is Peet's owned by Starbucks?
No. it is not owned by Starbucks but in 1984 there were some co-investors of Starbucks that purchase the four branches of Peet’s and then after four years they sold the Starbucks and focus on their four branches which then become Peet’s Coffee and Tea Company. But the Peet’s is not owned by Starbucks.
Is Starbucks cheaper than Peet's?
Yes, the Starbucks is really cheaper than the Peet’s and we have tested it ourselves and drink the same coffee from both places and the bill was $4.45 on the Starbucks and $4.95 on the Peet’s coffee so, for some people it would be only 50 cents that does not matter but for some, it might be a big thing.