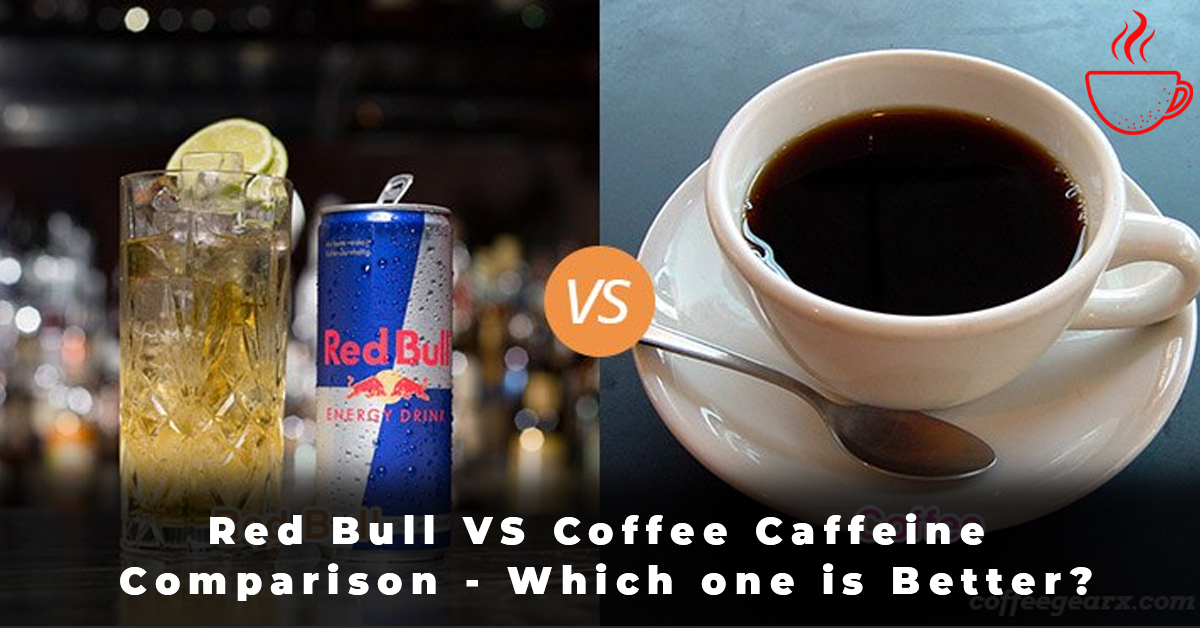 One of the main reasons people drink a cup of coffee in the morning is to increase energy. Thanks to caffeine, coffee offers drinkers a good start to the day (or the continuation).

However, coffee isn’t the only drink people are looking for to keep this caffeine high. Many choose energy drinks. What is the difference? Aside from the obvious taste differences, there are many other differences between these two options that should be noted.

So, read on for the full breakdown of the Red Bull vs coffee showdown, from caffeine content and health factors to other caffeinated alternatives to both. 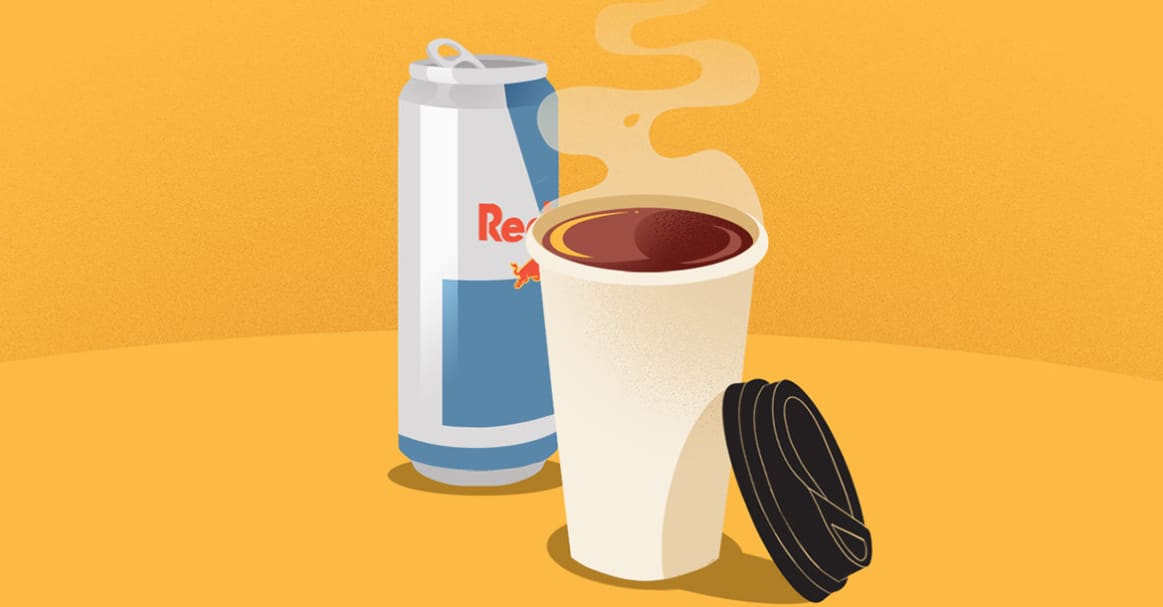 Coffee was discovered in what is today Ethiopia by a goat herder who saw that the goats were eating the berries from certain trees and when they did they became very energetic and we’re not resting.

Coffee is a popular drink that has hot water flowing through ground coffee beans. The amount of caffeine can change depending on the coffee; the caffeine in coffee is usually around 40 mg.

Red Bull (GmbH) is an Austrian company that created Red Bull as we know it in 1987. It has become today, one, if not the most popular choices for people who need a boost to get through the day (or night).

Redbull is a synthetic energy drink. You may be wondering how much caffeine is in Red Bull. Red Bull’s caffeine content is around 30 mg of caffeine. Coffee and Redbull have similar properties, but Red Bull has about 10 mg less caffeine compared to coffee. So the most common question is whether Redbull has more caffeine than coffee.

The nutrition contents of Red Bull and coffee vary significantly.

This energy drink is available in a wide variety of flavors, including original and sugar-free, and in different sizes. A standard 248 ml (8.4 oz) can of normal Red Bull offers (1 trustworthy source):

Sugar-free Red Bull differs in calorie and sugar content, as well as its levels of certain vitamins and minerals. One 8.4-ounce (248-mL) can deliver:

Red Bull Sugar-Free is sweetened with the artificial sweeteners aspartame and acesulfame K. Both the regular and sugar-free varieties contain taurine, an amino acid that can improve exercise performance.

Coffee also boasts polyphenol antioxidants, which combat oxidative stress in your body and may reduce your risk of several diseases. Remember that milk, cream, sugar, and other add-ins affect the nutritional value and calorie count of your cup of joe.

Effects Of Red Bull On Health 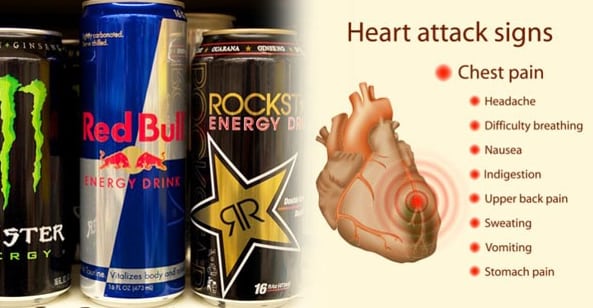 There is considerable controversy surrounding the health effects of energy drinks like Red Bull, especially among teenagers and young adults. Reliable source studies show that Red Bull significantly increases blood pressure and heart rate, especially in those who do not consume caffeine regularly.

Although these increases tend to be short-lived, they may raise your risk of future heart problems if you have an underlying heart condition or drink Red Bull regularly or in excess.

However, occasional Red Bull intake is likely safe. Owing primarily to its caffeine content, it can boost energy, focus, and exercise performance.

Effects Of Coffee On Health

Most of coffee’s benefits are linked to its antioxidants.

A review of 218 studies related 3 to 5 cups of coffee (0.7 to 1.2 liters) per day with a lower risk of various types of cancer, as well as heart disease and death. The same review linked coffee intake to a lower risk of type 2 diabetes, chronic kidney disease, Parkinson’s, and Alzheimer’s.

Like Red Bull, coffee can increase energy, as well as both mental and exercise performance. However, excessive coffee consumption during pregnancy is linked to an increased risk of low birth weight, miscarriages, and premature births.

Furthermore, this beverage may increase blood pressure and heart rate — but typically only in people who don’t often consume caffeine. Overall, more extensive research on coffee is needed.

While coffee and red bull have some things in common, they are very different. Coffee or Redbull both share high levels of caffeine. How they’re made, what they can contain, and what health benefits contrast greatly.

Why is Red Bull worse than coffee?
Both coffee and Red Bull contains caffeine, which gives you a short-term boost that is usually followed by a crash. Red Bull also contains sugar, which gives you more buoyancy in the short term, but also more crash later. At this point, the creators of Red Bull want him to deal with another himself. Of course, you can add sugar to coffee or drink coffee beverages that have the same effect. Red Bull also contains the amino acid taurine, which has a longer-lasting effect either caffeine or sugar, and a more specific effect on the heart. You have a stronger (not necessarily faster) heartbeat and higher blood pressure for up to 24 hours after just drinking one Red Bull. If you have high blood pressure, that’s not a good thing.
What is better to drink coffee or energy drink?
Despite Energy Drinks “special blend” ingredients, studies suggest energy drinks don’t boost attention any better than a cup of coffee does. Even just one 16-ounce energy drink can increase blood pressure and stress hormones and could put a healthy young adult at risk for heart damage, concludes a 2015 Mayo Clinic study.
How many Red Bulls equal a cup of coffee?
A Red Bull has 80 mg of caffeine in a 250 mL (8.5 fl. oz.) can, which is just a bit under what would be found in a similar amount of coffee. One 250-ml-can of Red Bull Energy Drink contains 80 mg of caffeine, about the same amount as in a cup of coffee.
Is it OK to drink Red Bull every day?
Yes, in my opinion, it is safe to drink a can of Red Bull every day. However, I would recommend that you go for the sugar-free version instead of the regular sugary version, and that statement assumes that you are a healthy adult. However, if you drink Red Bull every day for a long period of time, you may experience health problems at a later date. If you are not sure about anything, contact your doctor. I honestly believe that the risks from drinking any energy drink (including Red Bull) are no greater than the risks from having a daily cup of coffee. But, as a society, no one ever seems to be particularly worried about having a daily cup of Joe.